When Mr. Hall was first introduced to this amazing product made solely from rice, he quickly learned that there was nothing in the world that performed the way this product did. He thought what a story the world was missing. The Lord had blessed us with the gift of rice as a food, but now, here we were discovering another way for us to benefit from this amazing gift. Cultivated in Thailand, he named the first version of this product alfa PSP FORTE after Polysaccharide Peptides. At this time, you could not find Polysaccharide Peptides for sale anywhere in the marketplace. alfa PSP FORTE began to be recognized as a leading product in the world. Thousands of testimonials began to come in about the product. One thing that became very important to Mr. Hall was to never allow anyone to surpass this product and its unique technology. Using the idea of KAIZEN, which is the Japanese word for continuous improvement, Mr. Hall vowed to continue investing in the research and maximizing the benefits of alfa PSP FORTE which eventually became the alfa PXP FORTE we all know today. With a product this good the future must continue.

Mr. Hall chose to open the doors to ENZACTA in Mexico because of his love of the people and culture. After living with his family in Mexico and developing other Latin American markets, he saw the compassion and importance of the family unit within Mexico. While living in Monterrey with his family, he became involved in the community by serving as president of the American Chamber of Commerce in Monterrey, president of the American Society in Monterrey, President of the American School, and also the leader of the industry's largest company in Latin America. He understood Latin America. Now, years later, he felt he was coming home to the best place to create a family unit with ENZACTA. With just a handful of employees he began to fulfill his dream to redefine the industry worldwide and open the doors to endless opportunity for anyone willing to come on board. 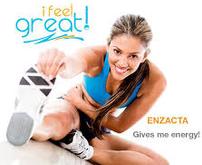 Multi Dimensional Marketing (MDM) concept is created.
Trying to use all of his new gained knowledge to make the industry better, he developed the innovative Multidimensional Marketing (MDM) concept for which a new model was born in the industry. The concept is based on sharing with IBOs the profits from all of the sources created by the company without having to be a shareholder. In order for this to work, understanding change and competition is imperative and the need to explore all venues of marketing so that more income can be generated wisely and thus shared, allowing IBO's a chance to achieve more financial success.